The interior of the restaurant is creatively decorated in a way that gives customers a pseudo-classy impression.The centerpiece light ornament was alluring.  I love the color palette. It felt homey and relaxing. I like the furnishing too. The chairs were very comfortable. The background music was a mixture of  80’s and 90’s English and French pop music. There is a little reading corner for children. There are no private rooms, however, certain areas can be made private with curtains. The staff was professional and friendly.

The salad ingredients were fresh. Both had a light sweet dressing and just the right amount. We ordered the grilled fresh tuna salad (RMB 55) and the chef’s “no oil chicken” salad (RMB 45). The Tuna salad was accompanied by a french styled caesar dressing. The tuna was very fresh and the salad was refreshing. The chicken salad was accompanied by a sweet mustard dressing.The chicken was a tad bit on the dry side, it could have been juicier. Nonetheless, I love how well the flavors of chicken, melon, salad greens, and dressing come together.

For the main course, we ordered the roasted lamb chops (RMB 118) and the roasted mustard chicken leg (RMB 68). The lamb chops were roasted to perfection. The first taste of the lamb chop felt like it was underseasoned. But as I ate on, the flavors began to manifest itself. The lamb was tender and had a mild and earthy taste.

The roasted chicken leg was savory and delicious! The zucchinis were sauteed in butter, still maintaining its crunchiness and sweetness. I was not too fond of the brown sauce, it didn’t enhance the flavor of the chicken.

The chocolate and peanut fondant was warm and very chocolaty. My friend who was a chocolate lover absolutely loved it! I, on the other hand, would have preferred if it was accompanied by a different flavored ice cream. 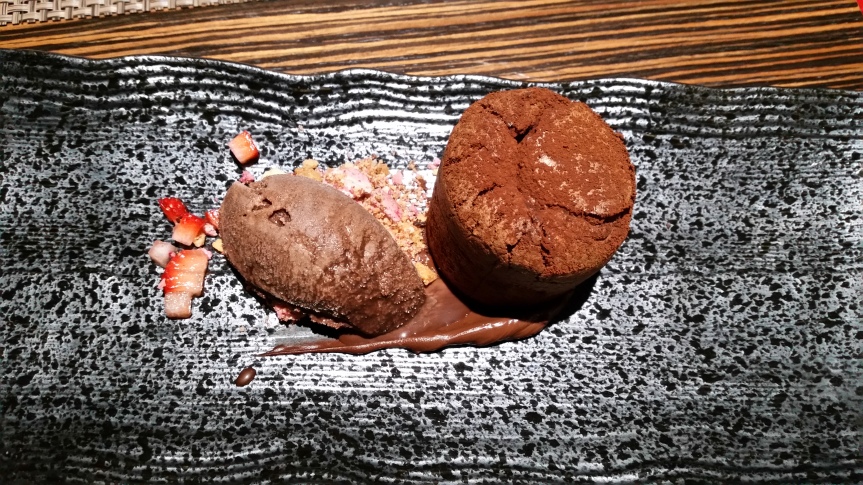 Before we entered the restaurant, we browsed through the menu. The menu is very limited. We contemplated whether we should go somewhere else seeing that there was not a lot of choices. I was glad we decided to give it a try. We had an enjoyable meal.

The German restaurant, Paulaner Brauhaus, at the Kempinski Hotel is my go-to place for good German food. The restaurant has an expansive beer garden and a large indoor Bavarian decorated dining area. It also has its own microbrewery.

The bread basket I was served consists of three types of bread – Pretzels, rye bread, and oatmeal bread, accompanied by three different spreads. The liverwurst and the homemade butter was absolutely divine with the bread.

A nice hearty bowl of soup for a chilly day! The tomato soup was thick and tangy. I don’t think I’ve ever had a tomato soup as rich as this.

The potato salad was decent, however, in my opinion, there was too much lemon juice in the dressing that it overpowered all other flavors. 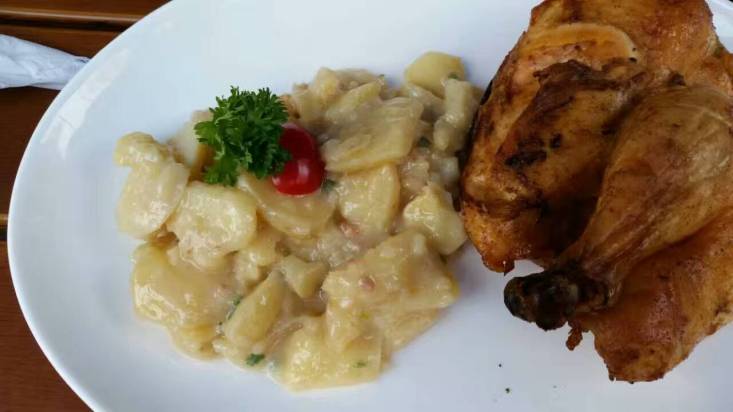 Schnitzel perfection! The chicken was tender and juicy, the crust was flavorful and crunchy. The lemon juice gives the chicken a nice tangy flavor. The Schnitzel comes with tomato salad, cranberries and pan-fried potatoes with bacon and onions. 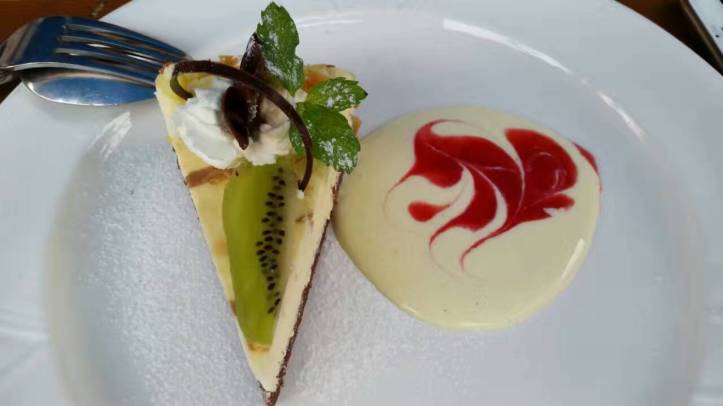 The prices of the dishes are little high compared to other German restaurants in Beijing. It would cost around RMB500 ( $75 ) for two people. However, if you love German food, this is the place to be!

I recently went to Tianjin for a weekend staycation. I highly recommend this hotel – great location, good service, and view.

Guests are given a complimentary drink (tea or coffee) for each day of their stay. I ordered a cheesecake to go with my coffee and relaxed on the chaise lounge. 🙂

The breakfast buffet at the Promenade had a good spread of Western and Asian dishes. There is a terrace where you can enjoy alfresco dining. One of the two German waiters was super friendly. He made an effort to ensure that everything went well. He made my breakfast experience an enjoyable and memorable one.

The St.Regis bar offers a wide selection of cocktails. The cocktails were good. There are cozy couches on the terrace, where you can enjoy your drink with the view of the river. SPG members get 1 complimentary drink. Do ask what the complimentary drinks are as it is not stated on the drink menu.

I'm Jess, and I'm a self-confessed foodie. Food made well makes my heart skip a beat.
I love to travel and explore restaurants and cafes at every destination I visit.

Easy and approachable recipes that make you beam

The Gluten Free and Vegan Alchemist

A Recollection of Past Travels

Showing the beauty of this world through the people, places and culture

what you create is creating you

Ingredients for a Beautiful Life!

A Blog about Keepin it Simple